The Southern African Development Community (SADC) is an inter-governmental organization established on 17 August 1992 and headquartered in Gaborone, Botswana and it is the successor . Its goal is to further socio-economic cooperation and integration as well as political and security cooperation among 15 southern African states. It complements the role of the African Union.

Democratic Republic of the Congo 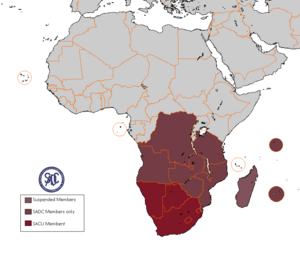